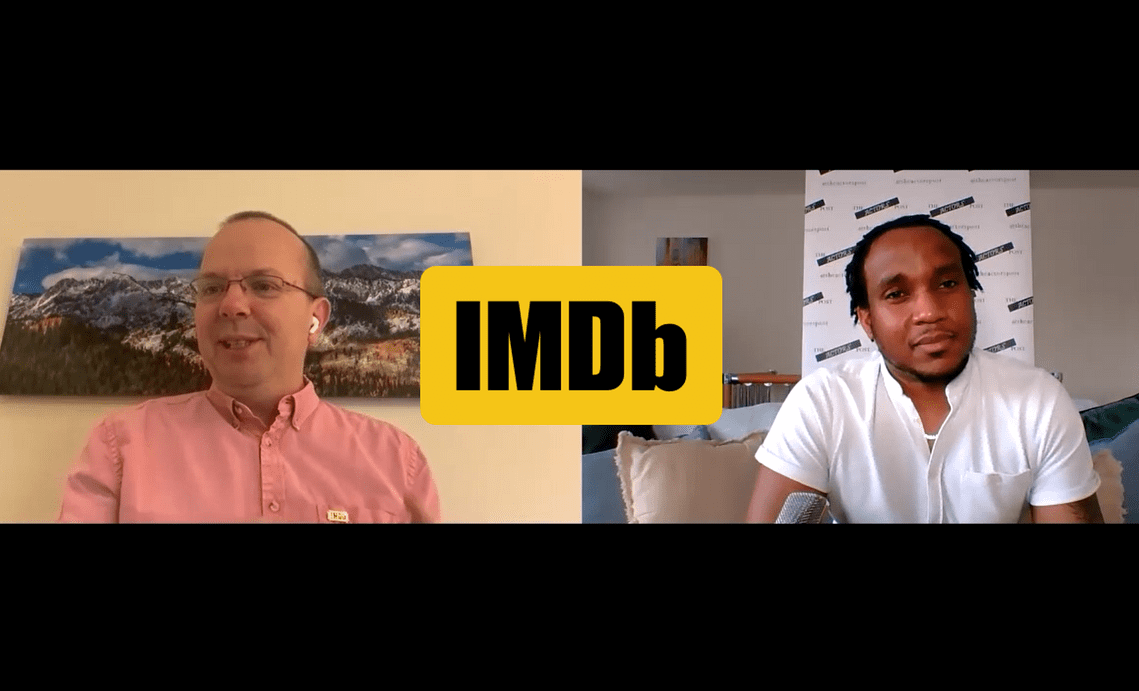 Finding the "Right Time" - An Interview with IMDb's Col Needham

Col Needham is probably not a household name that everyday people would recognise. Some would say, neither are his image results from a Google search instantly recognisable. That is so until you realise his beaming smile in those image results and the associated article links that he's tagged in, all connect to a very popular 4-letter, internet acronym. The story behind those 4-letters are as wide as the radiance of his toothy grin. Then you realise, upon opening one of those search results and learn who he is; he has every reason to smile because those 4-letters have risen to become a globally acclaimed, digital enterprise, borne innocently out of a hobby.

Within the acting and entertainment industry however, Col is probably one of the biggest off-screen names, possessing not only the biggest smile but also a matching friendly demeanour and boundless energy, for an individual who’s an internationally respected executive and entrepreneur. Few executives and tech giants match this man’s vitality, enthusiasm and success!

The Founder and CEO of IMDb spent some time with us at The Actors’ Post recently, where he graciously answered a few questions, allowing us to learn more about him and how the “internet movie database” came into being. A story which demands -dare I say- a movie itself, for how fascinating the twists and turns unfurled over the years

A Computer Science major at the University of Leeds in England, Col essentially started the database, by hand, on a "paper diary" that lasted him all of two weeks. There, he scribbled movie titles of all those he watched during that span. Realising he was quickly running out of space and that he could use his early love of computers to his advantage, he intuitively digitised his entries and transferred them on to his personal computer in 1981 (!). On his PC, he would create more digital real-estate for his movie information, being able to add more specifics like the details of each film's director, its cast, the writers and even including his own personal film reviews!

On the 17th October 1990, he then posted the very first version of the downloadable IMDb software on the “public internet.” Apart from having the presence of mind to actually start scribbling movie information, this internet posting was one of the early defining moments for the IMDb we all know and love. It shifted from Col recording everything in his paper diary, to being privately saved on his computer's small hard-drive, to essentially becoming a resource that was able to reach all corners of the Earth (for those who could access it back then). That move in 1990 allowed what became IMDb to skyrocket into what is now - the world's most popular and authoritative source for information on movies, TV shows and celebrities, with tools to help audiences discover and decide what to watch and importantly through its IMDbPro service, helps entertainment industry professionals achieve success. We assure you the details of his journey between 1981 to today and him explaining to us how it all happened, was mind blowing.

His story also makes the countless years of advice most of us have received, that developing a much-loved hobby and investing your time, effort and passion into its development, can eventually lead you to maximising opportunities, where making it a full time job is possible. Col would agree though, that it also takes a little bit of luck, the right connections and the requisite level of tenacity and perseverance for it to become “something”...eventually. Even though we must say, it becoming "something" was never at the forefront of Col's mind at the time of creating the database. It was his sole aim to share and collaborate with other global volunteers, who also possessed a love for film and everything attached to it. Luck led the database to be seen as potentially lucrative to investors like Amazon in 1998. With opportunities like those knocking at his door, Col was able to answer them and has not looked back since.

Unabashedly, it's the same journey I’m on!

Like everything in Col’s life, longevity, a level of commitment and focus was required to be able to sit on top of the world as he does in his field. Recently celebrating his 31st wedding anniversary to his long-time and teenage sweetheart also exemplifies his stick-to-itiveness (and knowing that when something is great, you stay and make it even better!). Nothing comes easy without putting in the time and effort to achieve success and happiness and his life seems like the perfect example of that in motion.

Col though is not just some ardent computer science aficionado, who’s also paradoxically, a workaholic movie buff! He enjoys travelling and like most of us stuck indoors in the UK and elsewhere, we've all had enough of only being able to go for a walk in a nearby park or down the grocery aisle, which has become routine! Like the picture of a snow-capped mountain range that hung on his background wall, he equally radiated that awe and energy and that scene was a perfect parallel to some of his most memorable travel experiences, which he misses dearly.

Col shared that during 2016 Olympics, he was lucky enough to be at Usain Bolt’s bar in Jamaica on the night of the women’s 100 meter final. Jamaican sprinter, Shelly-Ann Fraser-Pryce won the bronze medal, after overcoming a nagging toe injury and competitors who were out to dethrone her as the reigning gold-medal winner from the London 2012 Olympics and the best women's 100m sprinter in the world. Knowing what she overcame physically and being able to achieve a podium finish, she was grateful for the result and so too were her Jamaican supporters, who Col was in the midst of, experiencing in full force as they celebrated with the expected vigour and party atmosphere, when she bowed her head to receive her medal.

Take a moment to also imagine a day-in-the-life of Col, where as being part of his work and networking trips, he gets to attend the most exciting film festivals in the world!

Col reminisced with us about one of his trips to the Cannes Film Festival and accompanying Director, Nicholas Winding Refn to a premier of one of his productions, walking alongside him on the red carpet, taking in the sights, sounds, camera flashes and the ensuing screening. It’s a lifestyle that seems totally foreign in this pandemic and one that runs counter to our present, which progressively seems like the plot of the movie Songbird being played out in real life! However, from his glowing expressions as he relived the experience with us, it’s a life you can see he absolutely misses...like most would!

The Manchester born and Bristol-based Needham, though blessed with the entrepreneurial guile and magnetic flair for business opportunity, progress and development, is unlike any business boss you may meet. He came across as one of the most genuine, nicest and most down-to-Earth global successes, one could encounter.

From this passion of movie-watching, Col has seen more than 13,000 movies today and this has inextricably paved the way for IMDb becoming the world's most popular and authoritative source for information on movies, TV shows and celebrities. The IMDb website for desktop, mobile devices and apps for iOS and Android help fans decide what to watch and where to watch it and IMDb produces original video series and podcasts. IMDb recently surpassed 1 billion user ratings and 400 million data items. Its IMDbPro service is the essential resource for entertainment industry professionals, including comprehensive information and tools designed to help professionals achieve success throughout all stages of their career. IMDb provides entertainment-related information for Amazon Fire TV streaming devices and smart TVs as well as Alexa (Amazon’s cloud-based voice service) and X-Ray on Prime Video. IMDb also licenses information from its vast and authoritative database to third-party businesses worldwide.

Despite the growth of IMDb and all his success where Col has been fortunate to rub shoulders with famous Directors or having the privilege to share jokes with Will Smith about how IMDb’s first major advertising sales contract was linked to his movie Independence Day and also can reminisce with Chris Pine about being Uni of Leeds graduates, he was still humble enough to leave us and the aspiring actors and entrepreneurs out there with this advice:

“This [may seem] pretty standard but...it comes from my own position as well...Be passionate about what you do, because having that enthusiasm and that...flame inside of you, will be what can get you through some of the difficult times."

If there was ever an individual who personifies that quote, it would undoubtedly be Col. Him living his advice and being able to speak authoritatively, yet engagingly about what is needed to succeed, is probably why he has achieved as much as he has. The perfect mix of proactivity, intellect, personality and perseverance launched him to where he is today. It’s also not a stretch to think that anyone employing this combination of characteristics, searching for opportunities and having a bit of luck, would equally be as successful as Col but maybe, might become a pioneer or world leader in the area of their choice.

Sharing a final story where he was a judge on a virtual panel for a screenwriting competition, he shared some words of wisdom from one of his colleagues to the entrants of the competition after the results were announced:

“Look, I know you didn't all win today, there can only be one winner...but don't let that set you back. Part of the process of being in the industry is that people will say 'No' and you have to get used to [it]...but eventually the right people will say 'Yes' and that will be your right time.”

If Col only knew people would be saying "Yes" to him and that would be part of his history, as a teen writing in his "paper diary" in 1981! Like they always say, everything happens when it is supposed to and similar to Col getting his "right time," so will it be for me and for you!