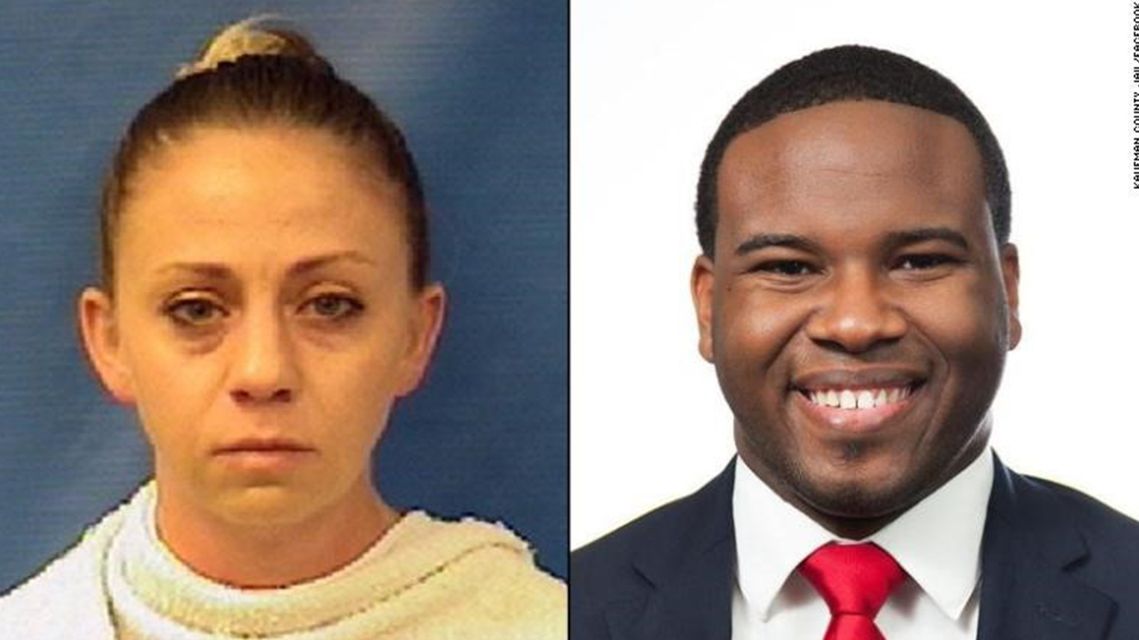 This isn’t a “Hot Take” as much as it being fact at this point. Still employed by the state of Dallas (at the time of this writing on 15/09/018), Officer Amber Guyger is a cold-blooded killer!

This also wasn’t the topic I expected to baptise this section of the website with either, where our featured Contributors can deliver strident opinions on topics that are close to heart and which they feel compelled to articulate. But we had to start somewhere, right?

However, after seeing all the reports on this case of the death of a talented, (and from the accounts of anyone who met him) humble, friendly and ambitious, young man; I was moved to express my feelings on this incident. At 26 years young, he was also an entertainer (singer in his local church), which this website concentrates on showcasing and a native of my country of birth, Saint Lucia; so I felt obliged to write this piece.

I would like to add to those who are out there attempting to and are setting the record straight (amazing work being done by the family’s lead attorney Lee Merritt and the rest of the defence counsel); that this case should not be hard to resolve, at all. What has been reported on behalf of Miss Guyger are lies. She is a murderer and should be punished to the full extent of the law, once all the facts have been revealed, due process observed, and the case has been fairly heard and sentencing declared (providing the case doesn’t drag unnecessarily).

When I first got the Google hyperlink posted in a WhatsApp chat group that I am member of, on Friday 7th September, 2018 at 3:26 pm (BST), all I noticed and was able to discern whilst looking at it quickly, was “shooting” and “Dallas police” buried in the long URL. In office, still at work and looking forward to the end of the working day and start of weekend, I just stared at it blankly and thought to myself, “another one!” considering this type of headline has become uncomfortably common. Soon after, across all WhatsApp groups I am a member of and occupied by other Saint Lucian friends and family, “Dallas,” “shooting,” “Lucian” and “Botham Shem Jean” started trending and flooded those chat windows.

By now, most of us have heard the summary of the story (or at least the 2 to 3 versions of it, as told by Dallas PD) or may have relayed it to persons who are unaware; like I had to do with a colleague in office at work yesterday here in the U.K. He had also seen the headline about “another” police shooting of an unarmed black man in America, but didn’t follow the details.

Her story: An off-duty police officer, coming from her shift at work returned home to her apartment complex, went to the wrong floor of the building, proceeded to enter the wrong apartment and shot a man after she wrongfully entered his abode, mistaking it for her own.

Went to the wrong floor…POSSIBLE.

Despite him having a bright (enough) red carpet at his door, that no one else on that floor or apartment block has?…HMMMM!

Shot a man with a “large silhouette” in the mistaken apartment…THIS STORY HAS AS MANY HOLES AS SWISS CHEESE!

According to a CBS This Morning report, “It wasn’t until after [the shooting that] Guyger turned on the lights and called 911, that she realised she was at the wrong apartment…” YEAH SHE’S GOING TO JAIL FOR A LOONNGGG TIME, AT THE VERY LEAST…RIGHT?!

Thanks also to the NBA’s Kyle Kuzma, the young Los Angeles Lakers Forward who articulated succinctly and seemingly nonplussed and unimpressed by the perspective of double-standards that persists and we’ve seen countless times around the assessment of individuals in such cases. Never mind that Botham isn’t actually American and has no criminal record, his response tweet to the Fox News headline exemplifies what many people have been saying and wondering about for ages:

I don’t understand why anytime it’s an African-American victim we always bring up something criminal about them.(which has nothing to do with the case) meanwhile when it’s a Caucasian male mass shooting, the narrative is “he’s mentally ill and needs help/rough childhood.” #media https://t.co/o7jWJbKEU3
— kuz (@kylekuzma) 14 September 2018

We may never find out the truth of this story, as the one person who would be able to give another direct account, to counteract anything being reported, is now sadly dead. And by what most people believe to be a cover-up unfolding by the Dallas PD, we may never get the absolute truth from Miss Guyger herself.

This is such a heart-wrenching and despicable case to hear about and to think of a mother, who travelled to Dallas after getting the unenviable call, that her son has died due to unclear and nefarious circumstances, is a very tough, unimaginable pill to swallow. We’re not even considering the fact that this is being played out very publicly, across global medial platforms, which must be unnerving to the family, as they essentially may not have the space and privacy to grieve in peace.

(Un)fortunately though, it is important that this play out publicly and in the media to highlight the injustice and inconsistencies that young ethnic minority individuals face daily in places like the US, when it comes to how they are dealt with by law enforcement and other government officials. Despite the silence of the Dallas PD, who have yet to report on whether Miss Guyger’s possessions, phone(s) and apartment was searched, release of toxicology reports or anything which could further justify or clarify the motive for this senseless killing, we have the above tweet aimed at smearing the name of a young man, who died in his apartment, whilst minding his own business. This isn’t even the clichéd “wrong place, at the wrong time” occurrence!

He was AT HIS HOME!

The character and attributes of Botham Jean and the identity of Miss Guyger are irrelevant in this case. Let’s just remind ourselves and read the summary of the situation given and for argument’s sake, let’s anonymise it and see if this makes any sense:

An armed individual, entered an apartment, which wasn't their own (read: trespassing/home invasion) and shot an unarmed individual (read: murder) after entering the victim’s abode.

I’m not even going into the details which have subsequently been released about Miss Guyger filing a noise complaint on Botham previously or entertain the many accounts on social-media that suggest they knew each other. Just by this anonymised summary above, it is not hard to see who’s at fault or what should happen here.

Thankfully, there’s extensive coverage of this in the media, many analytical and journalistic articles out there, by persons who may have more evidence and first-hand facts than I do, to support their statements. There are also quite a significant amount of responses by people all over the world from diverse backgrounds to keep this story relevant till justice is served. But I also would like to lend my voice to the outcry and disappointment at the pace at which the investigation has moved and also that this young woman should no longer be employed/paid by the police force, should be behind bars and a lot more information should be given to the family of Botham, who are apparently unable to get information in a timely manner.

Like any other sovereign state, Saint Lucia is a proud country. 238 square miles of creativity, intelligence, beauty and energy. The birthplace of 2 Nobel Laureates, many other significant people and now the life of Botham Jean. Another son-of-the-soil, who may, in my opinion (and this may probably be the Hot Take of this piece after all), arguably have an even more tangible impact than the “sons and daughters” who came before. It’s an absolute tragedy and disgrace that his life was taken, but posthumously, we hope and pray that Botham's life can stand for something important, as he was to his family and friends. We hope that this case and his story can magnify the injustice and also complement the awareness that persons like Colin Kaepernick, the exiled NFL star who respectfully took a knee only to highlight the issues relating to minority oppression and police brutality in his country. His wish to demonstrate peacefully to express that there should be no place for this kind of behaviour in America (or our global society) sent ripples across the continent to the point where The President of the United States decried and derided his (and others who followed) efforts.

It is my belief that the loss of a beautiful life, of a man from a tiny island can reverberate and underscore the pain and discord these situations have caused for many over the last couple of years. Botham, in this modern day, has the ability to become the most influential Saint Lucian ever if this case is resolved in the way it should be and brings about the type of change and reformation of a broken American legal system, with regards to the treatment of ethnic minorities. Neither him, nor his family need or would ask for that recognition but willingly or not, his life and the circumstances surrounding his death has taken on a much greater meaning. Hopefully it can be the example which causes the American government (and governments everywhere) to examine their policies, training and recruitment of people with significant control, especially those in law enforcement.

For a long time, esteemed persons like Sir Derek Walcott, Sir Allan Lewis, Sir John Compton, Ronald "Boo" Hinkson, Joseph Marcell, Darren Sammy and others, were the most notable talent exports from our little volcanic island. Now we have the life of Botham Jean, who in death, can be remembered by the world, as loudly as his booming, melodic voice and can arguably become the most influential and transformative individual from Saint Lucia.