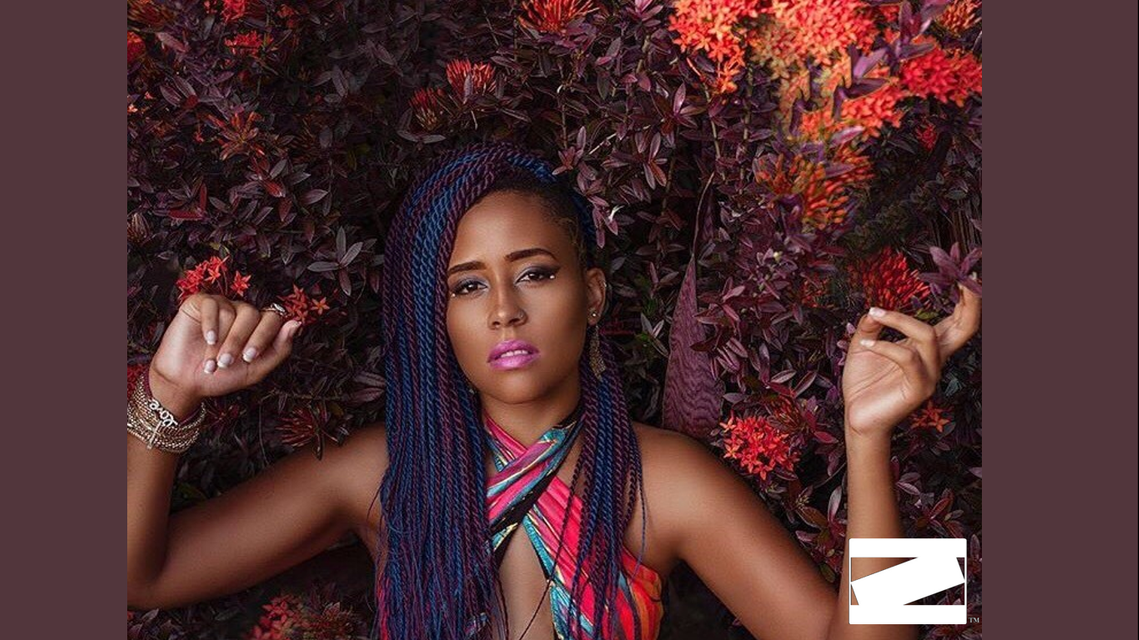 "Purple Haze"-ing It! (An Interview with Television Presenter and Personality, Chela Mendes - 2019)

Doing something you’ve dreamed about for the first time usually brings uncontrollable exhilaration, nervousness and/or the adrenaline rush that pushes people to limits of consciousness sometime which may either lead them to messing up, or almost subconsciously going through whatever motion/activity with a deftness that solidifies their destiny to be doing that thing for the rest of their life.

Chela’s entry into the world of television and becoming a personality and presenter for Saint Lucia’s Daher Broadcasting Service (DBS), one of the island’s longest running media entities, was an exercise in the proverbial star alignment and things falling in place.

“It was never initially on the plan, I never thought of it as a career” she explained to The Actors’ Post’s student colleagues Jade Burgess and Siobhan Smith. After being fixated on the smooth and effortless interactions of Jeanille Bonterre as her star rose as the host of the region’s TEMPO channel, that idea of “never being on the plan,” became an afterthought for Chela. Jeanille’s ability to playfully, yet skilfully hold conversations whilst maintaining beaming smiles (which never felt fake as a viewer), alongside her Caribbean warmth and style opened Chela’s eyes to the fact that there could be more to her life than the seemingly humdrum “doctor or lawyer” yesteryear aspirations or expectations of parents for their children on the island; not that there's anything wrong with those occupations, surely! Also, the retail, marketing and hospitality jobs she toiled in before she made that fateful decision to audition for the role of a co-host (which became available for a television show in 2008), proved those previous occupations were never the right long-term fit for her ambitions and personality.

“I loved [Jeanille’s glowing] personality, it reminded me of myself, she was so bubbly, upbeat…I just felt like I knew her. After seeing that, I said to myself you know what, I could do this, I would love to do this…” Seeing almost a mirror image of who she was cemented Chela’s desire to pursue a career in television and so far, it’s been a very solid choice!

Jeanille’s ability to connect with her wide-ranging Caribbean audience, but in this specific case Chela’s mind, happened in an almost indescribably telepathic way. Children are usually born (or arguably, develop) a sense of who they are and want to be in life very early and are driven by their desires to pursue that lifelong goal of becoming either a lawyer, doctor, fireman, musician, or fashion designer. Their passion(s) push them through life, with skills maturing as they grow, until they seize opportunities to do what they always dream(t) about. Quite often, those who maximise these opportunities and pounce on the chances that present themselves are the ones who gain the requisite experience and confidence, eventually becoming successful at these chosen activities/fields. For others, it can come a little later in life, where unique situations and scenarios play out, landing them at a moment, where we’ve all heard it so many times before, that it ‘clicks and it just feels right.’ That would probably be accompanied by an inner voice saying, ‘this is where I belong, or what I’d love to do for the rest of my life!’ Chela's experience was exactly that of the latter.

In our extended interview with Chela, she went on to discuss having one of her most memorable and nerve-wracking interviews with Caribbean novelist and educator Jamaica Kincaid (who was really impressed with her!); her experiences as a first time model, gracing the runway for the body positivity event “Gossophobie, stop!” fashion show, which took place in Paris, France in December 2017, accepting an offer to participate, after she was approached by Saint Lucian-born, French television personality and fashionista Vincent McDoom who was the Artistic Director and model scout; Chela also gave tips on the skills required to be a good tv presenter and finally gave some heartfelt advice to persons wanting to pursue their dreams, regardless of the industry.

“If I could leave a message for anybody…it would be just to pursue your passions and go for it full throttle, no matter what the obstacles are…” she advised. She also went on to explain her nickname “Purple Haze,” a moniker earned due to her obvious love for the colour purple but also it being one of the colours (amongst others) she loves using in her hair! “I want to live my life, like my hair!...I want people not to be able to figure me out, not to be…predictable…and people should not be afraid to be shamelessly and authentically themselves.”

We at The Actors’ Post surely can’t tell you how to live your life or what hair style or colour to choose next but we definitely echo Chela’s sentiment of being YOU, “shamelessly and authentically.” It’s the one thing you have control over and will be the conduit to your life’s success (however success is defined for you!).

“Every one of us has something, that we’re good at,” Chela offered as a last thought. We should all find and nurture it. You never know, it may lead you to your dream career! You know, the one that was never “initially on the plan!”